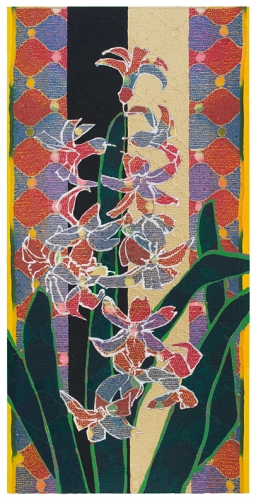 From Salome to Redouté: Robert Kushner in conversation with Aliza Edelman

Please join us as Robert Kushner and Aliza Edelman have a lively discussion about the history of ornamentation and decoration. By revisiting the position of "Pattern & Decoration" as both a condition of modernism and as a vital contemporary art practice, they will address the intersection of fashion, dance, and performance as developed in Kushner’s early pieces from the 1970s, and the radicality of his new artworks’ engagement with surface materiality and narratives of textiles and cloth.

Aliza Edelman Ph.D. is an independent curator and critic with an art historical focus on the transnational narratives of postwar and contemporary artists in the Americas.  Her scholarly writings are included in "Women of Abstract Expressionism," "American Women Artists, 1935-1970 — Gender, Culture, and Politics," and "Constructive Spirit: Abstract Art in South and North America, 1920s-1950s."  Her research on the pioneering Brazilian Concrete artist Judith Lauand has resulted in two exhibition surveys in New York. In 2011, she edited "Marylyn Dintenfass: Parallel Park" on the artist’s major public art installation. She is a frequent contributor to the Woman’s Art Journal and APOLLO and was appointed to the Committee on Women in the Arts of the College Art Association.

Robert Kushner's paintings are featured in numerous public collections such as The Museum of Modern Art, The Metropolitan Museum of Art, and the Whitney Museum of American Art in New York; the National Gallery of Art in Washington, DC; the Philadelphia Museum of Art; the San Francisco Museum of Modern Art; the Tate Modern in London, England; and the Galleria degli Uffizi in Florence, Italy. Kushner's work will be included in the upcoming 2018 and 2019 exhibitions: Pattern and Decoration: Ornament as Promise, at the Ludwig Forum für Internationale Kunst in Aachen, Germany and traveling to The Museum Moderner Kunst Stiftung Ludwig Wien in Geneva, Switzerland; Pattern and Decoration at Le Consortium in Dijon, France and traveling to MAMCO in Geneva, Switzerland; and Southern Light at Musée Régional d'art Contemporain Languedoc-Roussillon in Serignan, France.

Robert Kushner Reverie: Dupatta-topia is on view at the gallery until June 16th.