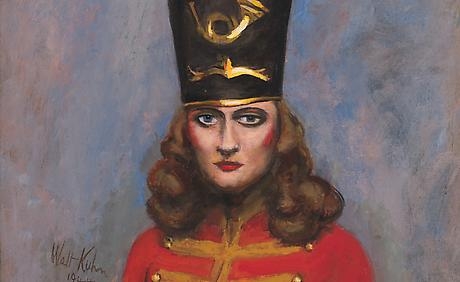 WALT KUHN (1877-1949) was a painter and promoter of modern art who participated in the developments that transformed the American art world in the first half of the twentieth century, including his major role in organizing and curating the historic 1913 Armory Show. This exhibition includes major loans, from museum and private collections, of his modernist portraits of showgirls and circus performers. It is the first major exhibition of Kuhn’s work in decades.

GAIL STAVITSKY is Chief Curator of the Montclair Art Museum in New Jersey, where she has organized many exhibitions, including Precisionism in America 1915-1941: Reordering Reality, Waxing Poetic: Encaustic Art in America, and Cezanne and American Modernism. She has also co-curated the centennial exhibition The New Spirit: American Art in the Armory Show, 1913 (February 17-June 16, 2013) at the Montclair Art Museum.

RSVP to mbowers@dcmooregallery.com.
Back To Top