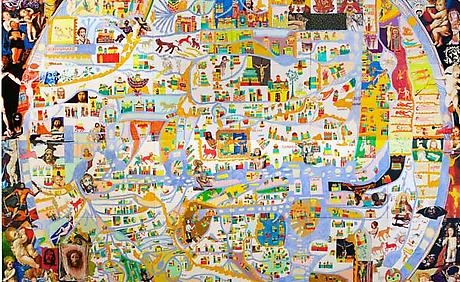 DC Moore Gallery is pleased to present Joyce Kozloff’s JEEZ for the first time at the main entrance to The Armory Show Modern at Pier 92. JEEZ is a twelve by twelve-foot painting in thirty-six panels based on the Ebstorf map, a 13th-century mappa mundi of the same size painted on thirty sewn goatskins. One of the most famous medieval world maps, destroyed during WWII bombing, the Ebstorf map combined geopolitics, science and theology. It depicted Biblical stories alongside pagan myths within a vision of the world as it was then known. Christ’s body served as both a symbolic and literal frame for the circular map, with his head at the top, his hands at the left and right sides, and his feet at the bottom.

In her response to this historic work, Kozloff has drawn upon a wide range of her artistic practices, incorporating her interest in cartography, decoration, history, material culture, and politics. As a secular person, she is particularly motivated by the ongoing evangelical rhetoric of some candidates in the current U.S. presidential race. JEEZ is her subsequent attempt to grapple with the religious images that pervade Western culture.

In JEEZ, Kozloff navigates through the history of art, incorporating everything from Byzantine mosaics to contemporary street art. In one vignette, Jesus holds hands with Krishna; in another, he replaces Che Guevara in the famous poster. She culls from sources high and low, from Old Master paintings to everyday kitsch, and encounters scores of representations of Jesus: black, Asian, Latino, and female; adult and infant; Jesuses from the movies and New Age hippie Jesuses. Over thirteen months, Kozloff painted 125 images of Christ into her contemporary mappa mundi. Each represents a stereotype from its culture, faithful to its own artistic ideal, but the proliferation of depictions wryly erodes their power.

Kozloff has been creating extravagant anthologies of images since the 1970s, drawing from a rich variety of global and historic sources. The hundreds of hand-painted star- and hexagon- shaped tiles in An Interior Decorated (1978-1979) were a compilation of motifs from the decorative arts. In Patterns of Desire (1987-1988), she combined ornament from throughout the world with corresponding or contrasting erotic art. The frescoes in her Knowledge series (1998-1999) were based on old charts that represented earlier understandings of the earth’s landforms. Boys' Art (2001-2002) is a collection of maps of the sites of historic battles, some overlaid with war drawings by her young son, others defaced by excerpts from art and popular culture. In JEEZ, Kozloff collects and displays archetypal images of Christ; as they accumulate, they transform from holy portraits into a rogue’s gallery of mismatched characters.

The Armory Show Modern takes place from March 8 – 11, 2012 at Pier 92, 55th Street and the West Side Highway. The hours are Noon to 8 pm from Thursday through Saturday and Noon to 7 pm on Sunday. DC Moore Gallery will be exhibiting at Booth 222.
Back To Top