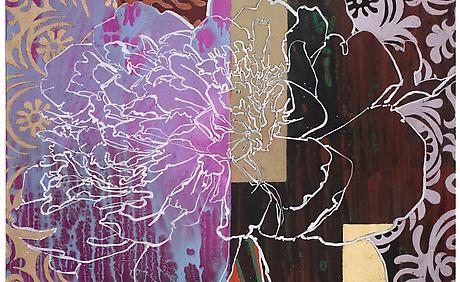 “I never get tired of pursuing new ideas in the realm of ornamentation. Decoration, an abjectly pejorative dismissal for many, is a very big, somewhat defiant declaration for me…The eye can wander, the mind think unencumbered through visual realms that are expansively and emotionally rich. Decoration has always had its own agenda, the sincere and unabashed offering of pleasure and solace.”
-Robert Kushner

In 1990, Robert Kushner was commissioned to create paintings for the atrium of Tower Place, the shopping mall adjacent to the Carew Tower. Completed in 1930, the Carew Tower is one of Cincinnati’s finest buildings from the Art Deco era. The mall was a busy center of downtown activity until many of the stores moved to the suburbs. The Tower Place building was recently sold and Carl Solway Gallery was able to rescue the four paintings, 9 feet by 27 feet each.

More information from Carl Solway Gallery
Back To Top