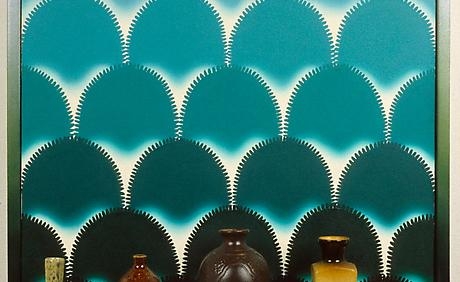 Two years before his death in 1997, Roger Brown completed a series of twenty-seven paintings with attached ceramics called Virtual Still Life. Although earlier in his career Brown had created paintings on found objects or with found objects attached, this was his largest and most coherent series of object/paintings. Based on the kinds of common ceramics he was collecting and displaying at his home in California, the paintings employ his typical stylized landscape motifs in response to the colors and shapes of the ceramics attached to shelves at their base. Roger Brown: Virtual Still Life presents the last eleven examples from this series outside museum and private collections.