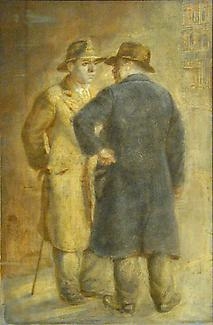 One of the foremost women artists of the twentieth century, Isabel Bishop (1902-1988) is probably best known for her paintings and drawings of shop girls, secretaries, and down-and out-men around Union Square in New York City. With a keen sense of observation and great technical skill, she portrayed ordinary people in an extraordinary way, often monumentalizing her figures within barely defined contexts, sitting on park benches or soda fountain stools, riding the subway or strolling the neighborhood during lunch hour. She also created a wide range of other work, including still lifes, interior views, and nudes, all of which redefine a classical sense of beauty in a contemporary mode.

Born in Cincinnati, Ohio, Bishop arrived in New York in 1918 at the age of sixteen to study illustration at the New York School of Applied Design for Women. After two years, she enrolled at the Art Student’s League, where she studied with Kenneth Hayes Miller, Guy Pene du Bois, and Robert Henri. In 1926, she moved into a studio that looked out onto Union Square at Broadway and Fourteenth Street.

At the time, the Union Square area was one of the busiest commercial and entertainment districts in the city, although much faded from its fashionable days in the late nineteenth century. Three major department stores were nearby, as well as many industrial lofts and small businesses that employed thousands of people. Numerous vaudeville and burlesque theaters, movie houses, billiard parlors, and amusement game halls were also in the vicinity. The sea of humanity that loitered in the park or passed through the neighborhood on a daily basis provided Bishop with a wealth of subjects for decades.

Bishop found particular inspiration in Renaissance and Baroque art, particularly that of Rembrandt and Rubens. She strove to give life to her figures and capture the essential qualities of suppleness, mood, and above all, movement. As with seventeenth-century Dutch and Flemish genre painters, she depicted her prosaic subjects with an uncritical eye, never idealized, but presented in a sympathetic manner that imbued them with an innate humanity. She approached her still lifes and interiors in a similar way, creating artfully arranged and precisely rendered compositions that celebrate everyday objects and elevate the commonplace.

Isabel Bishop’s work is in the collections of major museums across the country, including the Metropolitan Museum of Art; Brooklyn Museum; Museum of Fine Arts, Boston; Smithsonian American Art Museum; Hirshhorn Museum and Sculpture Garden; Cleveland Museum of Art; and Los Angeles County Museum of Art. She had her first one-person exhibition at Midtown Galleries in New York in 1933. Numerous solo exhibitions followed, including a major retrospective organized by the University of Arizona Museum of Art in 1974 that traveled to the Whitney Museum of American Art and several other venues, and a traveling retrospective of drawings presented by Bard College in 1989.