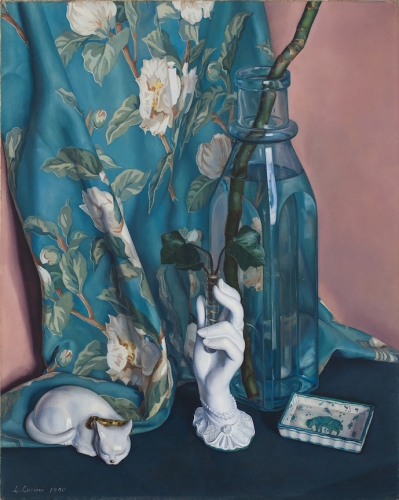 Luigi Lucioni (1900-1988) painted beautifully rendered, precisely described still lifes, landscapes, and portraits for over sixty years. Enlivening what he saw with his own point of view, he worked with great technical skill and strong feeling for his subjects. He considered himself a classical realist with a modernist perspective, drawing inspiration from the Italian Renaissance, as well as the work of Claude Lorrain and Paul Cézanne.

His masterful still lifes resulted from close personal observation, meticulous delineation, and the juxtaposition of diverse objects, carefully considered for their overall effect. He was looking for patterns, arrangements of shapes, textures, and colors that would give life to his compositions. They might project a local New England sensibility, Southwest ambiance, or be tinged with surrealistic overtones, but all were conceived with an essential cohesiveness that balances realism and subjectivity. As he explained in 1932 in Art Weekly,

My chief desire in art...is to paint not what I see but what I know and feel about objects and nature. I try to create objects that have an existence of their own, landscapes that have space, and solid forms and figure that have life and vitality. I love detail, but not for its own sake, but as a part of big masses and design.

Lucioni was an independent spirit who painted almost every day of his life until he was well into his eighties. He was also an accomplished etcher. During the course of his long and successful career, he exhibited in New York with the Ferargil Gallery, Associated American Artists, and Milch Gallery. He never participated much in the art world, though, and rarely associated with other artists. He preferred to pursue his own path, traveling between New York and Vermont, and painting as he pleased.

Born in 1900 in Malnate, a small town near Milan, Italy, Lucioni came to the United States with his family when he was eleven years old. He studied at the Cooper Union and National Academy of Design, and in 1924 received a Tiffany Foundation scholarship, which enabled him to spend part of every year for the next decade painting at Tiffany’s Oyster Bay, Long Island, estate.

Lucioni traveled to Italy in 1925 for the first time since he had left the country as a boy. He later recalled that the Renaissance art that he encountered during the trip “changed my work completely. After seeing the works of Raphael, Botticelli, and Piranesi, I was done for the rest of my life.”

In 1931, he was commissioned to paint a Vermont landscape. While it was not the first time that he had been to the state, he was struck by the beauty of the mountains and their resemblance to northern Italy during the trip, and began visiting regularly. He bought a farmhouse near Manchester in 1939, and from then on divided his time between Vermont and New York City.