In DC Moore's large gallery, Joyce Kozloff will present Voyages, a big, vivacious, new installation exploring western expansion from the Age of Discovery through the current era of globalization. Incorporating imagery from a variety of sources, Kozloff recontextualizes these images to invest them with a contemporary consciousness.

"Kozloff's themes have ranged from pornography to folklore to crafts," Lucy Lippard comments in her essay for the exhibition catalog, "And then, in the early 1990s, came to rest with maps -- celestial and terrestrial, often military -- as metaphors for power, culture, and conquest."

In addition to the history of navigation and cartography, ongoing subjects in Kozloff's art, Voyages examines the tradition of Carnival, revealing how it has morphed around the world. Venetian paper-mâché masks are intricately painted with maps of far-flung islands; vertical hanging banners are layered with motifs from the Americas, Asia and the Near East; and round paintings on canvas based on antique celestial charts of the heavens are crisscrossed with the paths of satellites in space. These diverse components range from comic to lyrical to scary.

In the smaller gallery, Kozloff will present American History, a series of collages examining dearly held myths about our country, beginning with ebullient explorers and noble native Americans, then moving on to the culture of European immigrants, slavery and the Civil War, the two World Wars and finally, apocalyptic projections for future conflicts. Their pompous yet quirky characters, fantasy war toys and historic memorabilia provide a rich field for dissonant readings.

Lucy Lippard observes, "One theme leads to another and then another geographical site -- a world cut and pasted and reinvented. Kozloff's work is about as visually and narratively complex as art can be…But to get it, the viewer needs to spend time, enter the images and stay a while…Overlays and interceptions transform anything like a straightforward picture into a swirling, not-quite-chaos of references offering first once meaning, then another, undermining both truth and lies…This is what history really looks like."In a related exhibition titled Voyages: Time Travel, on view at Solo Impression, 601 West 26th Street, New York City from September 8 - October 6, 2007, Kozloff will show new woodblock prints produced at HuiPress, Maui, Hawaii as well as new lithographs and monoprints produced at Solo Impression. 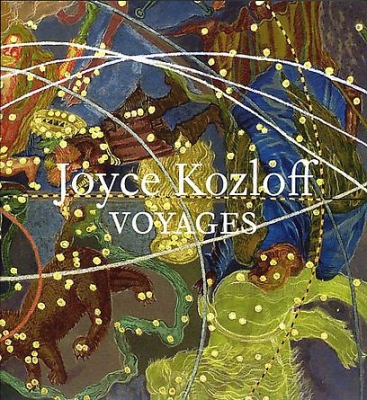 Joyce Kozloff: Voyages
Back To Top