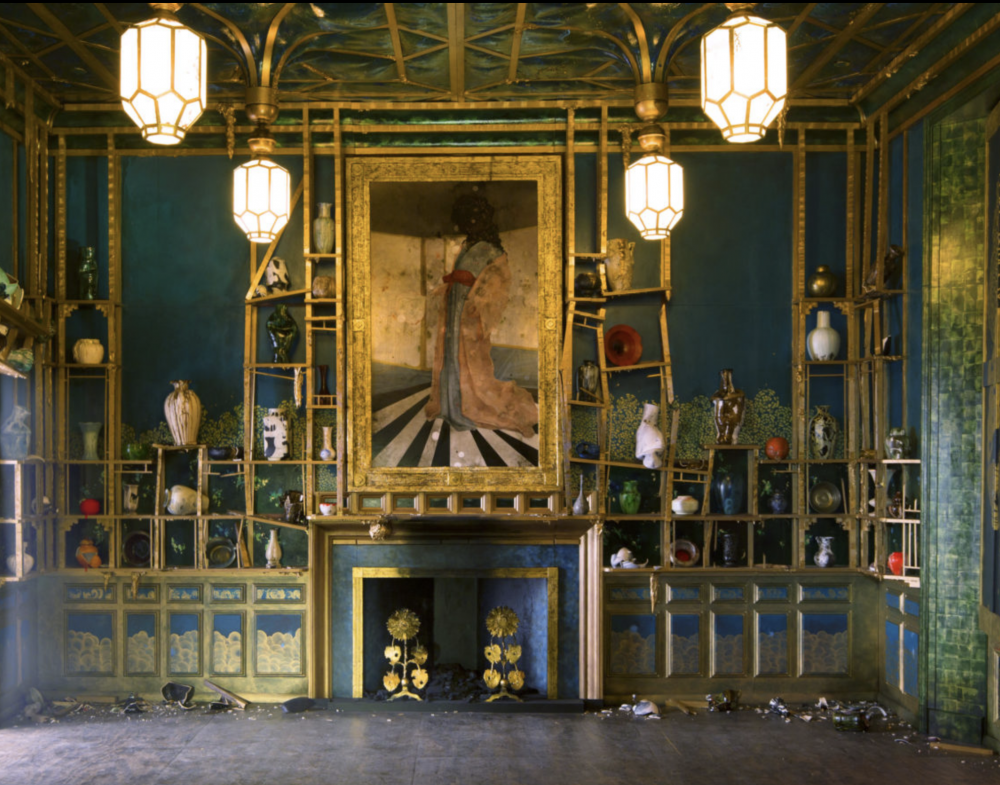 Painter Darren Waterston’s installation Filthy Lucre—the centerpiece of Uncertain Beauty—is a contemporary re-imagining of James McNeill Whistler’s 1876 decorative masterpiece Harmony in Blue and Gold: The Peacock Room. Waterston became fascinated with The Peacock Room both for its unrivaled union of painting and architecture and for its dramatic story of patronage and artistic ego.

The original—the dining room of the London home of shipping magnate Frederick Leyland—was designed to showcase Leyland’s collection of Asian ceramics, with Whistler’s painting La Princesse du pays de la porcelaine (1863-64) featured over the mantel. Asked to consult on the color scheme for the room, Whistler took bold—if not egregious—liberties while Leyland and his architect were away and in a fit of enthusiasm painted the entire room—executing his now famous peacocks over the expensive Italian leather wall panels. The collector refused to pay the artist and banned him from his house; Whistler, in response, painted an unflattering caricature of his patron titled The Gold Scab: Eruption in Filthy Lucre (The Creditor). Conflating the words frilly and filthy, Whistler made a jab at Leyland’s own “peacocking” as well as his miserliness.

At MASS MoCA, Waterston reconstructed the historical room as a sumptuous ruin. Inside, viewers found Waterston’s re-interpretations of Whistler’s paintings, along with stalactite-like ceiling fixtures and crumbling shelving replete with 250 hand-painted ceramic vessels.

Glaze appears to ooze down the wall, and the shimmering central peacock mural partially melted into the floor in a puddle of gold. A soundscape featuring voice and cello composed by the New York-based trio BETTY is heard intermittently through the space, punctuating the silence with hauntingly beautiful reverberations. The installation hints at parallels between the excesses and inequities of the Gilded Age and the social and economic disparities of our own time. At the same time, the work raises questions about patronage and the relationships between artists, collectors, and institutions.

Darren Waterston: Uncertain Beauty also features a selection of Waterston’s works on wood panel and canvas. These luminous paintings, which seem to glow from within, transport viewers to other-worldly spaces, somewhat familiar but unhinged from a particular time or place. Like Filthy Lucre, they express both the grotesque and the beautiful, hinting at utopian fantasies and Arcadian dreams, as well as apocalyptic nightmares. 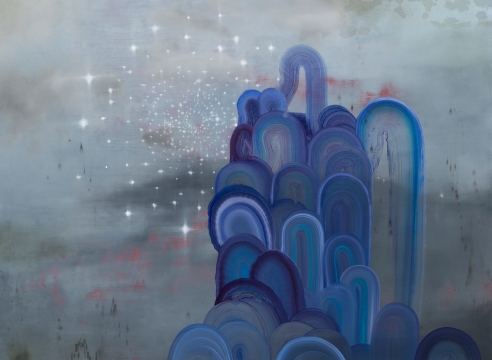 Darren Waterston
Back To Top