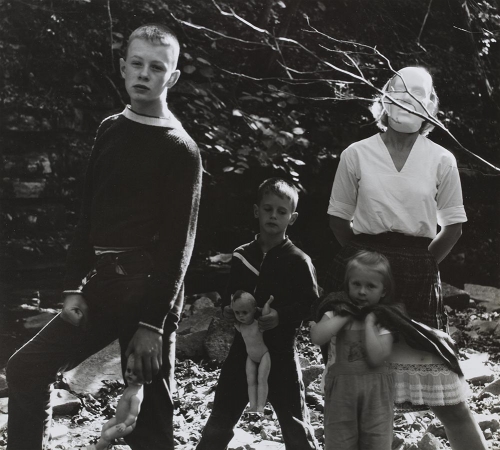 Ralph Eugene Meatyard (1925 – 1972) moved to Lexington, Kentucky in 1950 and developed a passion for photography along with a career as an optician. Over the next two decades, he created the enigmatic images that would secure his place in the history of the medium by consciously challenging the concept of the camera as a mere recorder of the world. Meatyard’s photographs are seldom seen in Maine. Stages for Being celebrates his legacy with over eighty vintage prints chosen to explore his innovative practice of staging photographs.

Meatyard’s work is deeply rooted in Kentucky, even as it reflects his wider knowledge of subjects as diverse as literature, jazz, philosophy, history, and art. On weekends, he scouted the countryside for abandoned homes to use as sets and directed his wife, children, and friends in scenes that suggest both ritual and theater. Creating mood with natural lighting, he used masks, dolls, and found objects as unsettling props and mined architectural detail for abstract compositional elements. He experimented with the expressive and metaphoric power of formal elements such as light and darkness, and explored photography’s ability to make visible what the human eye doesn’t register. He used motion to blur form, so that the human body appears to lose its solidity; at the same time, he blurred the line between the physical world and that of energy and the spirit. Considering the context in which he was working during the 1950s and 1960s—during the Cold War and Vietnam War, an era of tremendous social and political change in this country—gives his meditations on mortality a deeper relevance.

The photographer’s carefully constructed images work on multiple levels and are best read like poetry that uses symbolic language to provoke reflection and revelation. His use of dolls and other props was inspired by Surrealism, with its unexpected and jarring juxtapositions and connection to the subconscious. When the photographer Minor White introduced him to Zen Buddhism in 1955, it provided Meatyard with a way of bringing focused awareness of place and of the moment to his practice. But, in the tradition of Zen kōans, it also suggested the offering of a puzzle to be unraveled through deep contemplation, a question with no single or correct answer.

Meatyard’s voracious reading sparked endless ideas for his work and he embedded himself in Kentucky’s cultural community through a circle of close friends that included writer, environmental activist, and farmer Wendell Berry; photographers Van Deren Coke and Robert C. May; the Trappist monk Thomas Merton, who shared his interest in Zen; the painter Frederic Thursz; and the writer/poet/philosopher Guy Davenport. The latter could have been describing Meatyard’s photographs when he wrote in a 1982 essay, “Unless the work of art has wholly exhausted its maker’s attention, it fails. This is why works of great significance are demanding and why they are infinitely rewarding.”

This exhibition was curated by Janie M. Welker and organized by the University of Kentucky Art Museum. 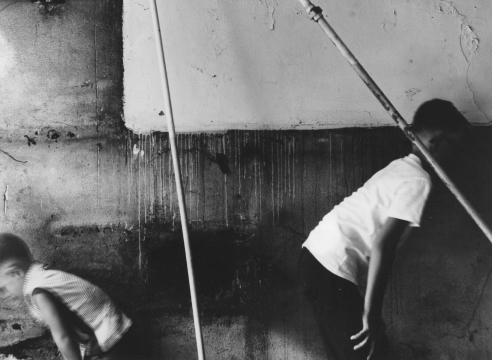 Ralph Eugene Meatyard
Back To Top